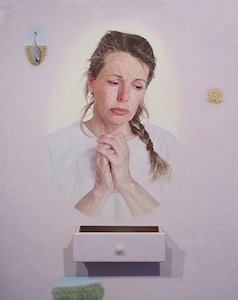 In more than two decades as a painter; through times when her possessions were meager and the marketplace was indifferent, Diane Marsh has refused to compromise.
Art for the Abiquiu denizen, is a calling not a career, a venue for articulating deeply held values rather than a revenue source. Some collectors find her work too confrontational, yet others stand before it moved to tears.
Tonight Marsh-whose pieces are in collections at the Albuquerque and Roswell Museum, Santa Fe's Museum of Fine Arts and Capitol Art Collection-is featured alongside painter Duane Slick, at Addison Arts. She is best known for her hyper-realistic portraits of people captured in moments of emotional angst, paintings that convey her belief that humans can only evolve by facing their pain and suffering.
With the birth of her son, Marsh’s focus has shifted. Her thoughts have turned to the state of the environment and what will be left of planet Earth to pass on to the next generation.
Set at Bitter Lake reservoir in Roswell, her recent oil “Sanctuary,” depicts a mother passionately embracing her young son, their faces a mix of serenity and desperation. The painting alludes to the state of the natural world and suggests that the Earth, like the mother can be a source of comfort and refuge.
“The Weeping Drawer,” a portrayal of a dispirited woman with hands clasped, perhaps in prayer, contains a working drawer. Inside are three small paintings-the Earth on fire, and antelope with an arrow in its neck and an image of a child. Marsh’s message is clear: we must honor our connection to nature of risk disaster.
All the canvases are crafted with meticulous detail that requires hundreds of hours of painting time and assiduous study of the human body. Marsh and her son are models for much of the work but, the artist emphasizes, these are not self-portraits. Her figures are meant as archetypes for all human beings.
Growing up in Buffalo, N.Y., art and nature were Marsh's passions. After earning a graduate degree in paintings, she moved to New York City to live in the eye of the art world and was lured to Roswell by an artist-in-residence fellowship.
“Roswell was a very small town then,” she recalls. “I absolutely loved the high desert plains and the pronghorn antelope that roamed there. This was the kind of life I wanted to have.”
She met her future husband, artist Eddie Dominguez, and nine years ago the couple's son was born. His arrival in the world prompted “Anton's Flowers,” a visual homage to a new life and the starting point in Marsh's most recent creative transformation. “Its a big still-life of beautiful flowers in the light,” is how Marsh describes the 2002 painting. “I wanted to do something about the joy, beauty, and happiness of having a child.” 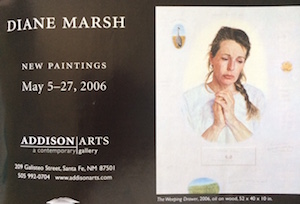