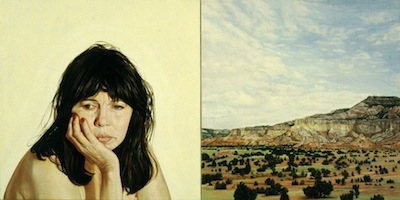 Diane Marsh "To Heal An Unlived Life" oil on linen 1998

Instead, Marsh uses her prodigious technical skills to show us people in the midst of intense introspection, coping with unstated difficulties and finding solace outside themselves.

Six of Marsh's works are on view through May 11 in the governor's Mansion Art Gallery. They serve as a striking coming-out party for Marsh, who moved to Nebraska from New Mexico a couple of years ago with her husband, acclaimed University of Nebraska-Lincoln ceramicist, Eddie Dominguez.

Marsh who has an MFA from State University of New York at Buffalo, has had one-person shows in New York, New Mexico, California and Colorado. The current exhibition is her first solo show in Nebraska and establishes her as one of the state's best figurative artists.

That is instantly evident in the two studies in the show. “Study for Deer Heaven”(1993) is a showcase of Marsh's skill with a pencil, full of fine detail captured only through close observation and a talented hand. With “Study for an Unlived Life,”(1994)Marsh uses oil on paper to create an almost photographic image of her female subject, with blue veins visible beneath the skin, precisely delineated wrinkles, red cappillaries in the eye and a perfect blending of pinks, whites, blue, gray and yellow to make up the skin tone.

Painting either herself or her friends, Marsh captures a moment in much the same manner as Robert Longo and as Sandy Skogland and others of the genre, she uses her brushwork to convey psychological content, not to show off in and of itself.

Three of the four paintings on linen use a diptych form, pairing the subject with another panel.

The fourth is a large 1986 painting “Hold Me/Save Me” in which a couple cling together, his head against her chest and arm around her waist, her arms cradling him against her body.The emotion in that scene is evident. But the details, from the shadows and shading down to his skin flaws and reddened eyes, make the painting that much more effective.

Two of the diptychs use landscapes as the object of their subject's contemplation, suggesting that either the forest of 1991's “Do Not Go Gentle” or the desert vista of 1998's “To Heal an Unlived Life” is the escape from whatever it is that is troubling the subject. The ambiguity there seems to demand what moviemakers call a back story-filling in the blanks about the life and emotional condition of subject, a young man in the first case, the same woman from the study in the latter.

There is however a universal understanding that comes through the work. The paintings aren't necessarily easy to look at. They're beautifully done, but not traditionally beautiful. Bit is in their slightly unsettling appearance that they achieve their emotional resonance.

In “The Awakening” (1998) Marsh provides more information. The woman clutches her arms across her chest, lifting her head upward. Above her sits an off-white field in which three small images- a deer's head, a rose and a baby-float vertically in the space. Into the paint are scratched the words “scar” and “mercy” and, along the edges, the phrases “you shall know the truth and the truth shall set you free” and “out of suffering compassion may be born.”

Small but powerful, “The Awakening” conveys the sense of a move out of sadness through a revelation of hope.In a sense, that's the theme of all of Marsh's work.

The governor's Mansion Gallery, located in the lower level conference room, is open to the public on ly on Thursdays from 1 to 4 pm. That means there are five more opportunities to see Marsh's paintings and drawing before her show closes.

Don't miss it , and be sure to allow enough time to contemplate the pictures. They're worth the effort.